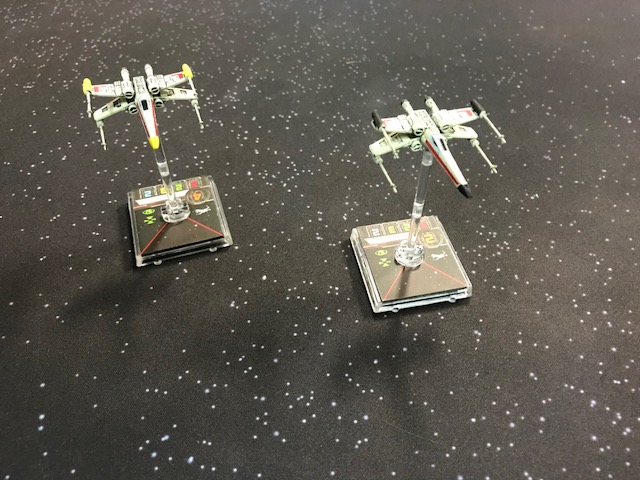 Elmer, owner of Argy’s space tavern, has deployed a communications jammer that has disrupted all signals to the Steamline Tavern. The Steamline is owned by Elmer’s rival in the Tavern Wars, Lew the Hutt. Now the Steamline’s juke box won’t work and, most annoyingly for Lew, he can’t access information about the bar tabs owed by the many smugglers who frequent his joint. Lew has dispatched ships to destroy the jammer in the container near the space taverns. Pilots hired by Elmer will try to stop them.

Place four asteroids within Range 2 and 3 of the Argy’s side of the play area.

The Argy’s ship that is positioned next to the container always executes a hard left 2 turn and has a permanent focus token. This ship is guarding the container by flying in a tight square around it. When Steamline ships are in range of this ship the Argy’s vessel always shoots at the nearest enemy craft.  The other two Argy’s ships play based on the Herkybird solo rules. (These haven’t been updated for Second Edition but they are still useful for solo practice play).

Argy’s: Destroy all Steamline ships or prevent the container from being destroyed by the end of the 50-minute round.

One thought on “X-Wing solo mission: Blast the jammer”

Such an X-Wing Hipster