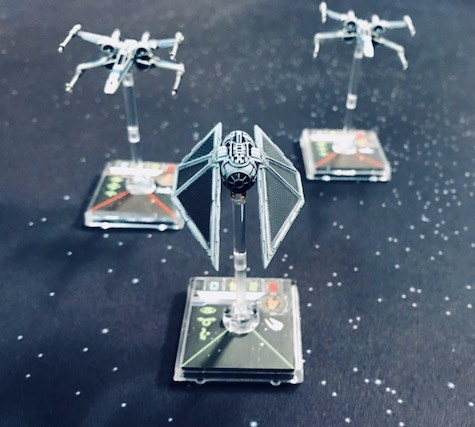 When you play a lot of mission scenarios you often end up using ships that don’t seem to get much attention in traditional, 100-point X-Wing tournaments.  For example, we’ve found that Y-Wings are terrific in Tavern Wars missions and feel they should get more action in competitive skirmish play.

Another vessel we really like is the Tie Striker. When you add the Adaptive Ailerons card (at a cost of zero) the Striker becomes very maneuverable and its dial allows it to turn around in a tight space (a 2 K Turn and a right and left Segnor’s Loop at 2). Yes, the Striker only has 4 hull points and no shields. But it gets 3 attack dice and its most expensive pilot, Duchess, has a pilot skill of 8 and costs only 23 points. But as of this writing a Tie Striker doesn’t show up in the top 50 best performing pilots in the latest meta. The Striker is a fun ship to fly and is a decent addition to any 100-point Imperial list.

Such an X-Wing Hipster